This summer I had an exhibition with parts of my „Leftovers. Utopia revisited“ Portfolio at the La Rondine Gallery in Bagin di Lucca, Tuscany. Located in an old building it was an amazing location. But for showing photographs it had one big drawback: Built directly into a mountain slope the humidity was really high. Shona Nunan and Michael Cartwright, the artists who own the gallery, are doing mostly amazing marble sculpture, so for them high humidity is not so much of concern.  For a short time it worked perfect (with the help of an dehumidifier running all the time). As a place for storage of photographical materials it would be the worst place you can imagine...


In today‘s article I want to explain a little bit how to protect your collection and to keep it pristine in order to preserve its value. The number of factors that can lead to degradation is quite high. They are, in no particular order: poor housing, poor framing, poor storage, and the effects of temperature, humidity and pollution.

The main physical enemies of photographs are direct sunlight and high humidity. But  there also are more hidden ones: adhesives that degrade over time or vapours that can be given off by wood, environmental pollution can be problem too.

The Environment
Keep your fine art photographs away from intense heat and direct sunlight (or unfiltered fluorescent lights). Try to avoid extreme changes in the atmosphere. The warmer the temperature the faster the picture will fade.
- The ideal temperature for storage is between 18°C and 20°C.

Humidity is another big concern. Paper, gelatin, dyes are natural products and very prone.
- The ideal condition of relative humidity is between 30-40%.

- Pollutants, such as cooking oils, particles from smoking and insect particles, are all causes of damage. Don‘t use plywood furniture for storage as it can evaporate solvents.


All used materials should be P.A.T.-approved. (The Photographic Activity Test, or PAT, is an international standard test (ISO18916) for evaluating photo-storage and display products.).

- Check on the condition of your artworks regularly to see if any damage has occurred.

- Never try to clean or restore damaged photographs by yourself.

If you will follow this basic rules you will  rejoice in your fine art photographs for a long time. And the will keep their value. 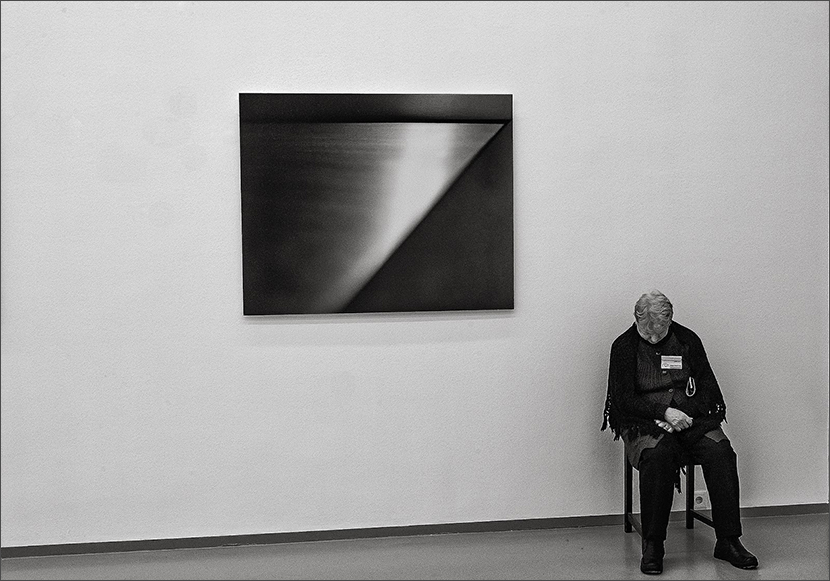 Photographs have been collected since its innovation. As early as the 1850s photographs were sold by art galleries. In 1854  the first auction of photographs took place in London (although the first auction in the USA was only a century later). By the early 20th century photography was established as collectible (but the debate about „photography as art“ is still going on even today) and from the 1970th on we can find the market as we know it today.

Seeing an investment potential can be a reason for collecting photographs but an increase in value is never guaranteed and is very much depending on what is called „art market“, which is following more or less the up and downs of the economy, reflecting every crisis (reflected e.g. in the downfall of auction prices in the 1990s or 2008).

In my opinion aesthetic considerations are far more important. As already said before: Collect what you love. For a beginning concentrate on one specific theme, period, style or artist. Later on your collecting decisions may evolve and change when your knowledge increases. And with everything in life it very much depends on how much money you want (or can) spend...

First of all I would suggest some reading. There are a lot of books about the „theory of photography“ (also imho most of them are more confusing than helpful). There are some „musts“ you should read: Susan Sontag‘s On Photography, Camera Lucida: Reflections on Photography by Roland Barthes or Walter Benjamin‘s On Photography and The Work of Art in the Age of Mechanical Reproduction. All these book my help you to get some background on the philosophical base of photography...

WHAT TO LOOK FOR WHEN COLLECTING PHOTOGRAPHS
[This of course is not a complete list. There are quite a number of other aspects that have to be taken into account (such as storage, presentation, etc), with which I will deal in another post.]

• Artist
So you found a photography you like. Or you have heard about an „upcoming“ photographer who‘s work you like. Try to learn as much as possible about her/him. Many (established) photographers have written books about their work.

Try to learn how they are thinking, what they have to tell you about their work, the ideas behind it. Look at their bios: do they exhibit regularly, is their work critically acclaimed? What is their place in the present market, the history of photography (although this are points to take into consideration when you are collecting as an investment only).

• Image
Most important thing: Do you love it? Or as the collector Arnold Crane stated: „I look for nothing [in a photograph]. It looks for me! It hits me first in the gut and then in the eye!“

• Condition
All photographic materials are affected by physical, chemical and biological deteriorations. Photograph stability refers the ability of prints to remain visibly unchanged over periods of time. Different photographic processes yield varying degrees of stability. Most contemporary photographs are expected to be in a pristine condition. 19th century prints are often faded. Generally speaking on can say that, under optimal conditions, the durability of a (classic) barite paper is  about 100 years, of PE (polyethylene) papers about 30 years and color papers between 15 years and 30 years. A contemporary ink jet print could last, depending on the used paper and ink, between 60 to more than 200 years.

The condition of a print has a big influence on the price. Ansel Adams famous picture Moonrise, Hernandez can vary between $0.00 and $600,000, depending on the condition. The latter price was achieved at auction for a 1948 vintage print with a clear and documented provenance in excellent condition. The current price for a late print in very good to excellent condition is $50-60,000. And the Ansel Adams Gallery reports about a print of Moonrise that looked like it had been a pinup in a machine shop, with heavy oil stains on the mount, smudges and scratches on the surface, that basically had zero value on the market.

• Signature
In the 19th and 20th centuries, signing a photograph was the exception rather than the rule. More people were making photographs than buying them. it wasn‘t until the latter part of the 20th century, when the market for photography became a reality, that the practice of signing became more common.

• Existing prints, editions
Rarity can be an important factor for evaluation. Most contemporary artists are producing limited editions but prior to the 1980s most photographers did not limit their prints. Be also aware of how each image is limited. Sally Mann, for example, is doing her limited editions as 25 prints in the format of 20x24 inch, 25 prints in the format of 8x10 inch while reserving the right to produce yet another 25 in 16x20 inch, so you can never know haw many prints exist (without checking with the artist or her dealers).

This are only a few points that a novice collector should take into consideration. I will deal with some more in upcoming posts. So stay tuned. ;-)


Collecting photographs is much about personal taste. If you see collecting photographs only as an investment possibility then maybe I am not the right person to give you advices. I know up to nothing about  investments. And personally I don‘t like most of the „most expansive photographs“, don‘t see any artistic values in them. But thats my personal opinion, is reflecting my personal taste. If you want to make investments to increase your money I can give you only a short view on the market and keep in mind: While many photographs can be fine investments, an increase in value is never guaranteed.

In the global art market the medium of photography represents  only a tiny fragment of about 2%. In 2014 all photographs sold at auctions brought in about $180 million (just to compare: the 2014 auction at Christie‘s  of Picasso‘s Les Femmes d‘Alger achieved with $179.5 the same sum).

Arthur Goldberg, a major US collector of contemporary photography for the last 40 years, said that it is up to history to decide if there should be equality. However, he thinks that buying photography is a real opportunity to own great art at a lower price. “Great art is great art,” he said, “whatever the medium.”

"To collect photographs is to collect the world."
[Susan Sontag]

Whether you’re buying for profit, pleasure, or both - there is no right or wrong way to collect. There are only some things you have to keep in mind to avoid spending money more than necessary.

Whatever your approach to collecting, the crucial thing is to enjoy it. “Buy what you love. Buy what speaks to you,” says Laura Noble, gallerist and author of the „Art of Collecting Photography“. “It’s a reflection of who you are.”
First and foremost, a collection should reflect your taste and interest (and budget).

Whatever you decided to collect, there are a number of criteria to follow (which are often the same ones for establishing the value appraisals).

There are many different circumstantialities one has to take into consideration to find the right value for a certain print. I want to show you this fact on one striking example:

Well, it very much depends on the kind of the print. Weston‘s photographs come in four varieties: vintage prints, signed by himself and prints late by himself (e.g. in the 1930s from his 1920s negatives or in the 1940s from his 1930s negatives). Then there are so called „project prints“ made under his supervision by his son Brett in the 1950s (when Edward developed Parkinson‘s disease). And there are posthumous prints by his other son Cole...

As I said before:  A collection should reflect your taste and interest. And it will be very much influenced by your budget...