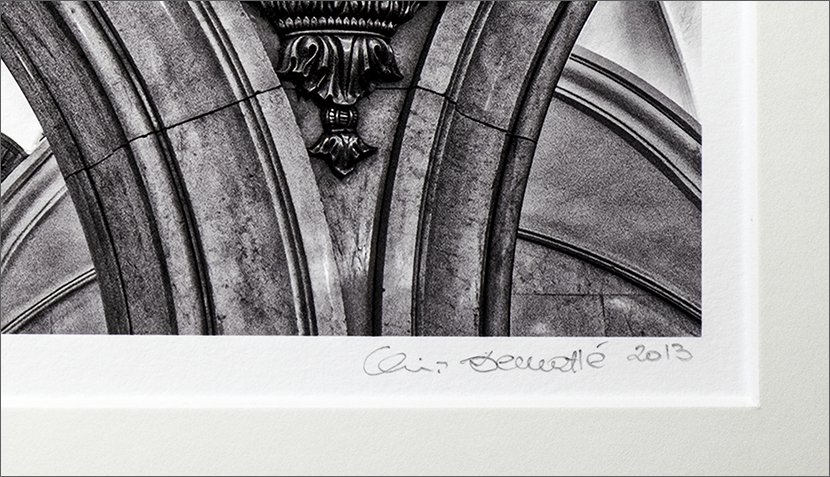 As there are no norms in this particular instance you will find a lot of variations. Signatures on the picture itself, verso (i.e. on the back) or recto (i.e. on the front). Sometimes you may find a C.A.T. (i.e. a „Certificate of Authenticity“ stamped on the back), sometimes you wouldn‘t find anything of this...

1/99
Such numbers are pointing out that this particularly print is part of a Limited Edition (in our case Print 1 out of an edition of 99). A limited edition is normally hand signed and numbered by the artist. Again, there are no clear definitions. In some countries (e.g. in 14 states of the USA, in Great Britain or New Zealand; in France, it is a legal requirement to edition your prints to 25 copies or less) there are laws defining a “imited edition“, in others there are more or less generally agreed conventions (e.g in Australia, where limited editions rarely number more than 99 and are often less). Many Limited Editions are Portfolios, which is a group of photographs with some unifying concept published together. 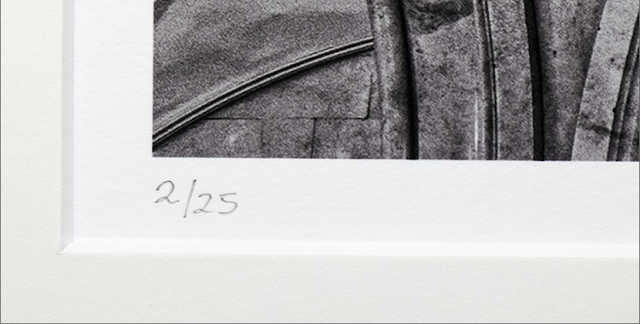 In generally one can say that a “Limited Edition“ is

You may not find the artist‘s signature only but from time to time some abbreviations like A/P. Most of them derive from the printing craft:

A/P (Artist‘s Proof)
Usually about 10% of the total number of prints in an edition remain the property of the artist, and are called Artist's Proofs. They are identical with the other impressions in the edition. Artists usually use them for their personal portfolio or for special exhibition.

P.P. (Printer‘s Proof), W.P. (Working Proof), B.A.T. („Bon A Trier“)
An impression of the finished work that is identical to the numbered copies.  Identifies a proof which will serve as the standard to be maintained during the printing of an edition. This originate from the times when the artist didn‘t to the printing by himself. (Henri Cartier-Bresson for example almost never did his own printing.)

H.C. („Hors de Commerce“)
Prints that are given to someone personally by the artist or are for some reason unsuitable for sale are marked "H. C." or "H/C", meaning "hors de commerce", not for sale.

U.S. (Unique State)
A print that is one of a kind. Meaning that there is only this one, unique print.

Several years before his death, Andy Warhol signed his name on copies of the tabloid magazine Interview (of which he was the editor). Regularly costing $2, he charged buyers $50 for these signed copies and they sold pretty fast...